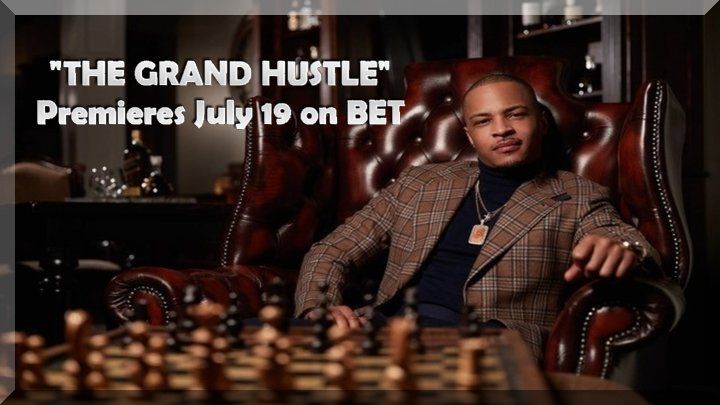 BET Networks, in partnership with Grand Hustle Productions, is excited to announce the premiere of “THE GRAND HUSTLE”, a fierce new reality competition series, featuring 16 business minded men and women vying for an opportunity of a lifetime! Created and Executive produced by Grammy-award winning rapper, actor, entrepreneur and the King of the South himself, Tip “T.I.” Harris, the series centers around the hopeful hustlers as they compete for a coveted position, with a six-figure salary, within Tip’s multimillion-dollar Grand Hustle business empire which he built from the ground up.“THE GRAND HUSTLE” competition series is set to heat up the summer on Thursday, July 19th at 10:00PM EST.

“The Grand Hustle Empire is always expanding so therefore we needed to add a very talented, highly skilled executive to our team,” said Harris. “It doesn’t matter if you got your hustle at Harvard or the hood, “THE GRAND HUSTLE” is about how you handle business and what you can do for the brand so I wanted to create a show that offers an equal playing field.”

The 12, one-hour episode series, is set in Atlanta and the candidates are determined to prove they have what it takes to out-hustle the rest. They serve up big deals and even bigger doses of drama each week as they fight for their seat at the table. Ultimately, only one will be crowned the Grand Hustler.

“Tip is one of the smartest most impressive businessmen I have ever met,” said EP Brian Sher. “His business acumen is second to none, and his entrepreneurial spirit is unmatched. I’m excited for the world to get a window into how Tip thinks and operates.”

For more information on “THE GRAND HUSTLE” log on to BET.com. Join the conversation on social media by logging on to BET’s multiple social media platforms and following us @BET.

Tip “T.I.” Harris is a GRAMMY Award-winning recording artist who has left an indelible mark on the world of music and pop culture. Having sold over 10 million albums in the US alone, Tip remains an influential figure in the world of music and entertainment. He is the founding executive of Grand Hustle Records, the owner of two successful, urban clothing brands Akoo and Hustle Gang. In 2016, Tip became an artist-owner of the global streaming service, TIDAL, alongside Jay Z, Beyonce’, Rhianna and others. Tip’s business interests and portfolio now stretches across a variety of sectors including real estate development, lifestyle, technology and sports, to name a few. Tip is also an actor and producer who will reprise his role in the Marvel sequel “Antman & The Wasp” this July as well as “Glow Up,” a music drama he will also co-produce as part of the PepsiCo’s Creators League.

Also widely recognized for his influence in the community, Tip has become an activist and dominant force in social issues around race relations, civil and human rights. In response to mass inequality and the murders of unarmed Black citizens, Tip began his Us or Else movement where he penned a thought-provoking series of op-Eds in the New York Times, Washington Post and Huffington Post, a socially charged album entitled Us or Else: Letter to the System, followed by a provocative short film. Using that as a platform, Tip launched a formal charitable, social justice and philanthropic arm, Harris Community Works, dedicated to driving systemic change in underserved communities. His most recent philanthropic work includes relief and support efforts for Puerto Rico, Houston, Colin Kaepernick’s Million Dollar Challenge and more. Most recently, Tip became a coveted member of the Mayor of Atlanta’s Transition Team. In this role, he will support the Mayor and City of Atlanta in policy and advocacy efforts that drive the city of Atlanta forward.