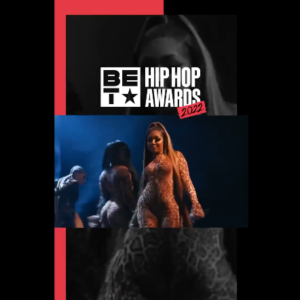 The annual celebration will bring together the hottest names in hip hop to pay homage to the best in hip hop culture. The BET “Hip Hop Awards” reigns as one of the top three cable award shows for Urban viewers of 2021 (BET Awards (#1), Soul Train Awards (#2), and BET Hip Hop Awards (#3)* and ranks in the Top 10 for most social cable awards in the last 12 months.** The official  “BET Hip Hop Awards” 2022 nominations, selected by a voting academy of esteemed music industry insiders, performers, and presenters are to be announced at a later date.

“From reflecting the diversity of self-expression to empowering and connecting communities to effect positive change at a global scale, hip hop continues to be an art form that dominates all aspects of culture,” said Connie Orlando, EVP Specials, Music Programming & Music Strategy at BET. “We can’t wait to be back in Atlanta to bring hip hop’s luminaries together as we celebrate us authentically and apologetically. We have so many surprises in store!”

For more information about the “BET Hip Hop Awards” including the latest news and updates, visit bet.com/hiphopawards Join the conversation on social media by logging on to multiple BET social media platforms: Twitter by using the hashtag: #HipHopAwards; follow us @HipHopAwards and @BET

BET, a unit of Paramount (NASDAQ: PARAA; PARA; PARAP), is the nation’s leading provider of quality entertainment, music, news and public affairs television programming for the Urban American audience. The primary BET channel is in 125 million households and can be seen in the United States, Canada, the Caribbean, the United Kingdom, sub-Saharan Africa and France. BET is the dominant Urban-American consumer brand with a diverse group of business extensions including BET+, the preeminent streaming service for the Black audience; BET.com, a leading Internet destination for Black entertainment, music, culture, and news; BET HER, a 24-hour entertainment network targeting the Urban-American Woman; BET Music Networks – BET Jams, BET Soul and BET Gospel; BET Home Entertainment; BET Live, a growing BET festival business; BET Mobile, which provides ringtones, games and video content for wireless devices; and BET International, which operates BET around the globe. https://youtube.com/shorts/mXuYmgXJppw?feature=share

“BET Hip Hop Awards” is an annual celebration that pays homage to a culture that changed the world while highlighting the best in hip hop music. Year after year, BET delivers the best in hip hop for an unforgettable night of performances, cyphers and tributes honoring hip-hop legends that have and continue to make hip hop culture a global force.

Seatfillers and More is dedicated to allowing you entry in to some of Hollywood’s Biggest and Most Exclusive Events. Some of our current shows and events as well as events that we have handled in the past include the following: The Grammy Awards, The Emmy Awards, The BET Awards, BET Hip Hop Awards, NAACP Image Awards, Survivor Finale, Miss America Pageant, Stand Up 2 Cancer, MTV Lifebeat Concert, The Game Awards, The Latin Grammy Awards, Billboard Music Awards, Specials for MTV, Vh1, Comedy Central, NBC, CBS, ABC, FOX and so many more. https://seatfillersandmore.com