NEW PREMIUM SVOD PRODUCT SERVING URBAN AMERICAN AUDIENCES TO DEBUT IN THE FALL MORE THAN 1,000 HOURS OF EXCLUSIVE ORIGINALS AND FAN-FAVORITE SERIES, MOVIES AND SPECIALS FROM BET, TYLER PERRY, TRACY OLIVER, WILL PACKER AND MANY MORE 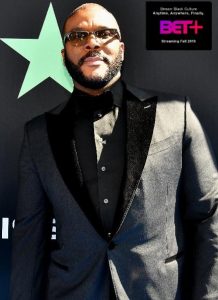 “Urban Americans are the leading consumers of streaming services, with higher SVOD adoption rates than other consumers, which is why we’re so excited to launch a premium product for this underserved audience. BET+ is a natural extension of BET’s linear network, which has been the leading home of urban culture for decades.

The combination of new, original shows and his giant library of popular movies, series and stage plays that Tyler brings to our joint venture creates an amazing product for his large and passionate fan base.”

“In our industry, the way people consume content is constantly evolving. I’ve paid attention to my audience and what works for them and, for that reason, I’m very excited not only about the idea of partnering with BET to create new and exciting content, but also about the idea of giving people a personalized experience through the ability to curate the content they love to consume.

On a personal level, this will also be the first time I’ll be working in areas like unscripted and variety television, which will afford me the opportunity to work in fresh, creative ways with new voices and to discover new talent,” said Tyler Perry.

BET+ will offer consumers a comprehensive collection of premier African American-focused dramas, sitcoms, films and specials in the streaming universe. It will be the official home of Tyler Perry’s collected works across film, television and the stage.

The service will feature Tyler Perry’s box office-topping theatrical films, including films from the “Madea” series; original series “House of Payne” and “Meet the Browns” and a selection of Perry’s stage plays.

In addition, the first BET+ original — “First Wives Club,” a new 10 episode scripted drama from acclaimed “Girls Trip” screenwriter Tracy Oliver — will debut on the service in the fall.

The modern television remake of the classic 1996 revenge comedy starring Goldie Hawn, Bette Midler and Diane Keaton now stars an all-star African American cast including Jill Scott(“Why Did I Get Married”), Ryan Michelle Bathe (“This is Us,” “Empire”) and Michelle Buteau(“Isn’t It Romantic”).

“First Wives Club” kicks off BET+’s slate of exclusive original programming that includes the premiere of a new series from blockbuster hit-maker Will Packer (“Ride Along,” “Think Like a Man”) and new original series from Tyler Perry and more.

The service will also feature a deep library of beloved series, films, and documentaries from BET Networks and the Viacom portfolio — including “Real Husbands of Hollywood,” “The New Edition Story,” “The Quad,” “College Hill,” “Comic View,” “Hell Date,” and more — most of which have not previously been available on streaming platforms.

BET’s new and current-window programming will continue to be available on BET’s linear network, including the newly-announced Tyler Perry original drama, “The Oval,” which will debut on BET as the first series under Perry’s multi-year content partnership with the network.

With over 75 hours of new original content slated to premiere on BET over the next year, Perry’s line-up will also include another drama series, two comedy series, and a live holiday-themed production.

BET fans will have additional access points to BET content on BET.com and the BET Now app for TV Everywhere users.

In addition, BET’s recently launched channel on Pluto TV, the leading free streaming television service in the U.S., will continue to feature hundreds of hours of classic films and box office hits.

Tyler Perry Studios is a state-of-the art film and television production facility founded in 2006 by actor, producer, filmmaker, playwright and philanthropist Tyler Perry. Located in Atlanta, Georgia on the historic grounds of the former Fort McPherson army base, the new 330-acre campus is one of the largest production studios in the country. It boasts a variety of shooting locations including 40 buildings on the national register of historic places, 11 purpose-built sound stages, 200 acres of green space and an expansive backlot.